I want yesterday once more.
I had an absolutely fabulous time last evening. I got to see Xenz – a spray can artist at work.
I had participated in the British Council Young Creative Entrepreneurs awards last month and as a result, got invited to this session at the Idiom office here in Bangalore. As befits an Air force officers daughter, I arrived well in time and hence, actually got to spend a little time chatting with Xenz. What struck me almost instantaneously about him, was his childlike delight at being able to spray paint two bare walls. Mind you, he’s been doing this for the last 20 years!! First, as a “destructive’ artist as he says- not always with permission and then legitimately about 12-13 years ago. The other was his unabashed exuberance in starting the work. There were no preliminary drawings, it was as if the painting was already there for him and he was just going over the lines. No hesitation.

In everything I paint, I trust my instinct to guide me- he reinforced that a thousandfold. I came away with a lot yesterday. I am inspired to work bigger and better- not just in scale but also in thought. Oh! and I also came away with two brushes that he very generously gave me- didn’t want to have to carry them back to London. ( He left early this morning).
I certainly look forward to meeting him again.

I also want to thank Rwituja and Aanchal from British Council for both, inviting me to the event yesterday as well as to participate in the YCE awards initiative itself. I did not win but I made a few friends 🙂 I also want to thank the team at Elle Décor for recommending my name. 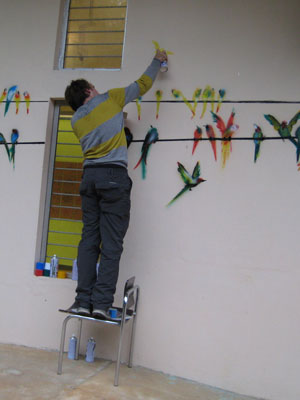 You can see Xenz’s work here.

6 thoughts on “Yesterday once more”