Oh! and both the kettle and I made it to the pages of Deccan Chronicle on 21st Aug 2011. 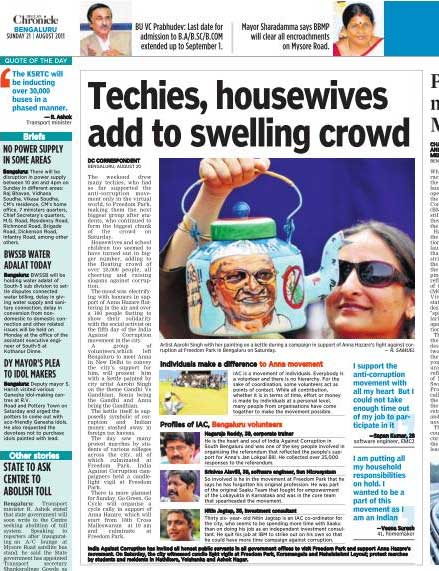 I started this kettle on Thursday, it was ready by Friday, got lacquered Saturday morning and went to Freedom park Saturday afternoon. And on Sunday it was with Anna!!

Truth be told it was not made for him. It was a concept that I had been toying with for quite a while. And using Sonia Gandhi’s image was also only to be able to better depict the wordplay of ‘Gandhi vs. Gandhian’ in today’s context. I want to say here, that Sonia Gandhi came to my exhibition in 1994 at the Triveni Kala Sangam in Delhi. She was extremely courteous, encouraging and actually a pleasure to interact with. And I can not fault her on anything as the person who met me that day. I quite liked her in fact. I still do. I am amazed at how far she has reached. And in that capacity alone, if nothing else, she will feature in my work again.

But, I also have to say- I don’t entirely agree with her politics either.

Here are two videos of my kettle being introduced at Freedom Park here in Bangalore on 20th Aug 2011 and one of me speaking to the crowd. I understand that given the nature of imagery on the kettle, it was not carried on to the dais at the Ramlila grounds in Delhi. It was in fact accepted by Team Anna and now sits in their office.

4 thoughts on “Update: Gandhi vs. Gandhian kettle goes to team Anna in Delhi”