This commission is a birthday gift for my dear friend Roopa Pai‘s father-in- law. She asked me to paint his old school lunch box  with images that define him.  I wish I had thought to take a before picture. Completely slipped my mind 🙁
He is a man of many talents and this box tries to capture a few. The box is quite small. Just about 10″x 12″ and about 2.5″ in depth.

Roopa was very clear on the colour palette she wanted me to stick to. The imagery had to be simple, almost illustrative and not loud or kitschy. 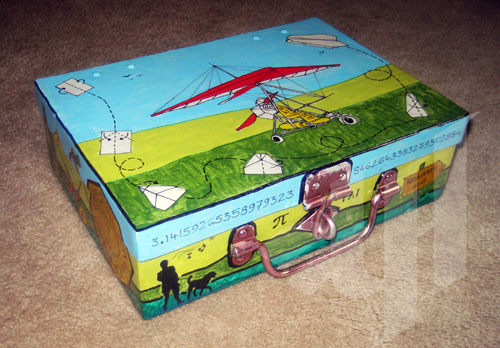 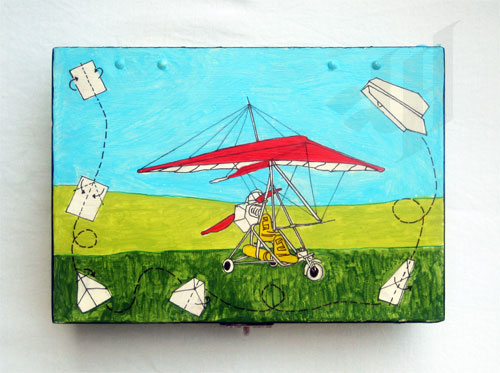 The top depicts his love of flying– hence the paper plane and his microlight complete with red wing. He is also a hobbyist carpenter who has executed quite a few major home furniture projects all by himself – including an octagonal dining table with a Lazy Susan in the middle. That is shown on one side of the box. 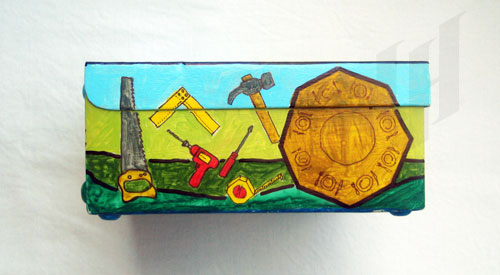 He is also an amature wine-maker. He essentially makes wine from Bangalore Blue grapes, but has also experimented with mango and a couple of other fruits. The wine bottle depicted reads ‘Painot Noir‘. His name is B R Pai, that’s why the many takes on the word Pai.
It was always his dream to own a farm. Now he owns one (minus the cow he has always wanted), but grows toor dal and mangoes and peanuts on it. The peanut butter jar label reads ‘Painutty‘.  The cow is shown in a thought bubble since he is still dreaming about owning one. 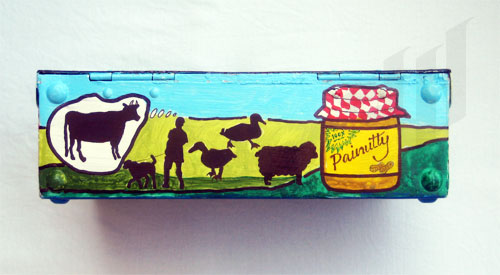 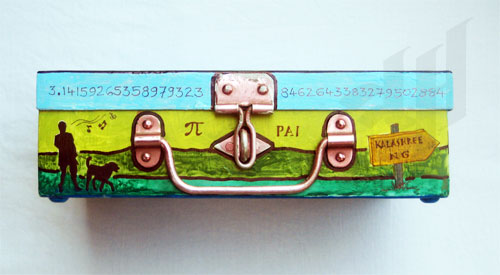 And recently he is completely involved in the rebuild of his old home, even obsessed by it. He calls the project Kalashree NG – Kalashree is the name of the old house (after Raag Kalashree). Since there is no actual house to paint, I painted a sign pointing forwards towards the new house. The sign reads Kalashree NG, where NG stands for Next Generation. And in there is also the mathematical value of Pi.
OH! and he owns a wonderful labrador called Leo. That is why the man and a Labrador in silhouette…
(Roopa and her husband Arun are the force behind Bangalore Walks)