Connections.
That is what life is about. How we connect and embrace the people in our lives…

On 24th Sep 2012 I lost my paternal grandmother (Aaji) to a heart attack. It was sudden and unexpected. And heartbreaking to say the least. I went home to Indore for her last rites and found my life changed. I wrote about that earlier.

This post is the next in the series about honouring my ancestors and rediscovering my roots. I wrote about my mother’s side before. This time it’s my father’s side that I want to talk about.

But first a little anecdote: My Aaji always made waran/ arhar-toor dal (lentils) at home with rice. This was made at every major meal regardless of what else was on the menu. And she made it a little sweet with jaggery (cane sugar) and thin enough that you could drink it like soup. And that is what I always did. Extra was made when I was in town because I would drink it through the day instead of tea. On this trip when I went home for her last rites, it was made again by my Kaku (aunt), Sunanda Bhagwat Phadke. That cup of dal was a million childhood memories in every sip…

Please click the thumbnails to see a larger view.

This next image is of the chair that has always been there in my grandparent’s house and in just this place. First, it was where my grandfather sat – through the day. And when he passed on, it became the place where my grandmother sat. It sits empty today. Many use it as a transit seat when someone comes to visit but I don’t think it will ever be filled again.

My fathers family hails from Ratnagiri in Konkan, though the family moved out of Konkan almost two hundred years ago. I now have extended family in Pune, Nagpur, Ujjain, Gwalior, Mumbai and Indore. My grandfather’s (Aazoba) family came first to Harda in Madhya Pradesh and then to Indore when the Peshwas moved up north.

My grandfather Vishvanath Vinayak Phadke, was one of two siblings and my grandmother Vimla Karmarkar Phadke, one of seven.

This next set of pictures is of my grandfather Vishvanath Vinayak Phadke as a young man and then of him a few years before he died. 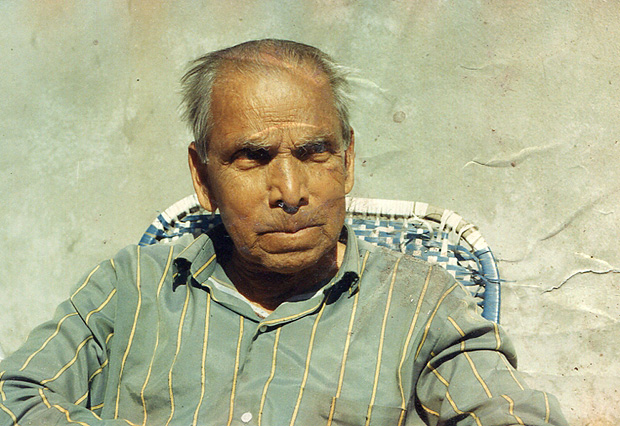 The next image is of my grandmother and my grandfather’s sister Kashi Phadke Panse .

Aajoba’s father Vinayak Phadke, was with the Excise and Customs Department of the Holkar State and worked in the opium growing area of Neemach in Madhya Pradesh . He later joined the State Printing Press. He was a health freak and was a wrestler. He jumped into a swirling river in spate from a bridge some 40 feet above on a bet!! They say he was a very fit man and even at 70, could do full kastrat (exercise) with body builders wooden mallets. Each of these weighed at least 15 kg and came up to his thighs 🙂
Music has always been an important part of our family. And it certainly was a big part of his life- he could play the harmonium and took part in theater. He introduced his grandson-my father, to Indian classical music when dad was barely five. So no points for guessing why my name is Aarohi. Oh! on occasions he also allowed my father to taste bhaang thandai (cannabis). All this before dad was ten!!

And Aazoba my grandfather, was the exact opposite. He wanted to study History and English literature. So genes do play a big part in who one is. I did my Masters in History! Aazoba hated that he had to join the Post and Telegraph Department during the 2nd World War. His heart was not in it. He wanted to travel and explore the world. He proudly told my father that he burnt his imported fur cap during the Swadeshi Movement when he was still in school. He was a small man in height but a giant in stature. A socialist at heart and hated ostentation. He believed in total equality.  So when Abbas Khan, the postmen came home, although he was given tea in a glass reserved for him, he sat in the same chair on the same level as the rest. After all, Aazoba  was the head of a high class Brahmin family!! But one that had no time for orthodoxy and rituals. Quiet, unassuming but with these glorious blue eyes. His eyes twinkled every time he smiled. Even at 79 when he smiled he looked like a naughty kid who was up to mischief!! But he brought up his family without ever raising his hand on any of the kids and hardly ever lost his temper. He wanted us to be humble and hated arrogance of any kind. He retired as a senior postmaster. He was addressed as Bhau (brother) by everyone. Including his kids and grandkids!! He died on 16th June 1998 at the age of 79.  Having seen successful children and grandchildren, he left us before he could see his great- grandchildren. Today he has seven. 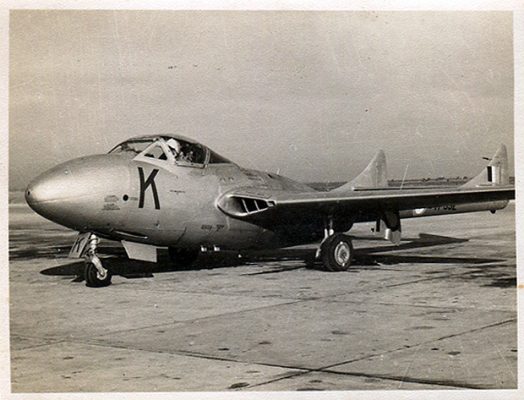 My grandmother, Aaji was of a different mould. According to some, she could have become a CEO or a barrister had she studied beyond school. That is how enterprising she was. She came from a very rich family of Malguzars (tax collectors) in the British Raj. She grew up riding horses! She was tall, both in height and stature. Infact her height helped her get to the ‘high jumpers‘ team in school. She had love ooze out of every pore and absolutely delighted in feeding people. If anyone called and told her that – ‘my son or daughter, niece, nephew, a friends child or even distant neighbors child is coming to Indore- could you please look after them?’ Aaji would not only feed them at every opportunity but often they actually ended up staying in her house!! I grew up calling all these people tai, dada, maushi or kaka (elder sister, elder brother, aunty or uncle) At her funeral there were so many people that I did not know who I was related to by blood and who, with just affection, love and good will. But I am blessed for having been born into this family.

The first image taken in 1954, is of my Aaji (in the center in a dark sari) as a young lady holding her second born – my aatya (Aunt), Bhanumati Phadke Hardas.  On the right is my Aazoba holding their third child, Prakash Phadke. And hanging on to his coat tails is my father, Air Cmde Ramesh Vishwanath Phadke, (retd). The picture is taken at Amer Palace in Jaipur, India
This next image has Aaji seated in the middle on the floor with my father. And standing behind her is my grand aunt Kashi. This image was taken in 1946, the year my dad was born.

Aajis father Dinkar Raghunath Karmarakar, was the Malguzar of some 15 villages north of Damoh in Sagar district of Bundelkhand, now Madhya Pradesh. His ancestors had also come there with the Peshwas. My great- grand father actually had judicial and administrative powers. He collected taxes and as part of his salary was allowed to keep a small part. He held court. Literally 🙂

This was a hereditary title, as a result it passed on to her eldest brother when my great- grandfather passed away prematurely at the age of 48. Once that happened, the brother wanted to finish his responsibilities as fast and as best he could. Aaji came to Ujjain to study in 1938-39. When she was about 12. And just about 5-6 years later was married to my grand father. She used to tell me stories about how great the leap was for her. She went from riding horses to a stage where once she stood in line with four children outside a community toilet, waiting her turn while her child had diarrhea.  But life improved and the four children flourished. My fondest memories are of my grand mother telling me stories-especially the one about the eight thugs. The amazing part was that the story changed every time she told it. I don’t think even Aaji knew the original anymore 🙂

This time when I went home, I met everyone I could and took pictures. And rummaged through old trunks to get my hands on family treasures and memories in the shape of some old photographs.

And look what I found rummaging through those trunks… my grandfather Vishwanath Phadke’s janampatri (horoscope)! 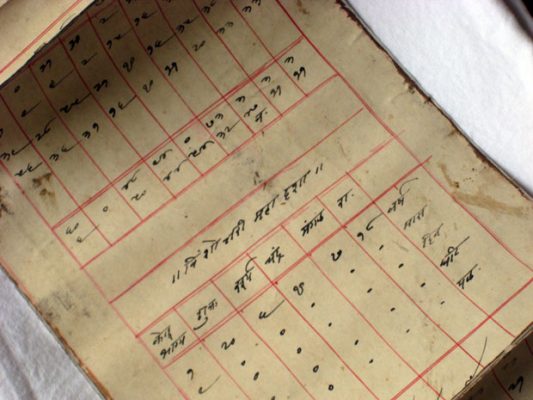 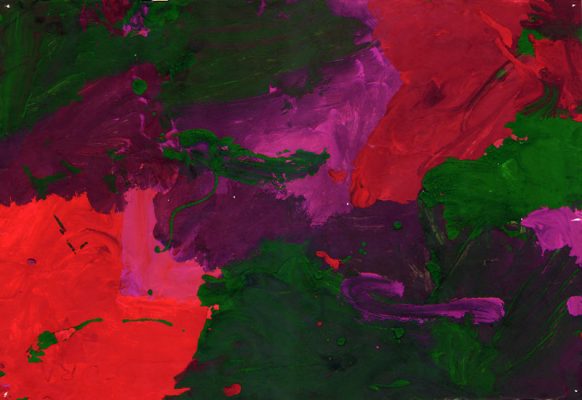