This is a portrait of Elvis – a rescued Boxer. It is approx. 12×16 inches and is done with Acrylics on canvas.

This is his story –
Elvis is now about two years old. Before he was rescued, I am told he was tied up in a bathroom by his previous family for most of the time. Maybe they didn’t know how to handle the high-energy that boxers are known to come with. He was rescued by YODA – Youth Organization for the Defense of Animals in Mumbai.
When found he was severely underweight. His pelvis was very very weak. Apparently that’s how they named him Elvis! One could count the ribs on his body, he didn’t have the muscle mass that boxers are known to have. 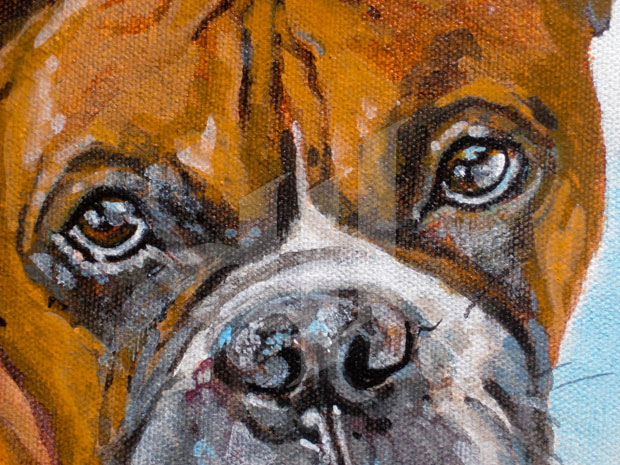 Today he lives with Ajay in Pune. Ajay was in Bangalore, when he saw Elvis’s picture for the first time. It was love at first sight. Ajay wanted/needed to meet Elvis immediately. The next morning Ajay took the first flight out to Mumbai to meet him. At the the kennel where he was being boarded it was the same story. Love at first sight for Elvis too because he climbed into Ajay’s taxi and refused to get out. Ajay was in the midst of setting up home in Pune (he was in transition from Bangalore to Pune) and asked YODA to keep Elvis for the two weeks it took him to set up home in Pune. 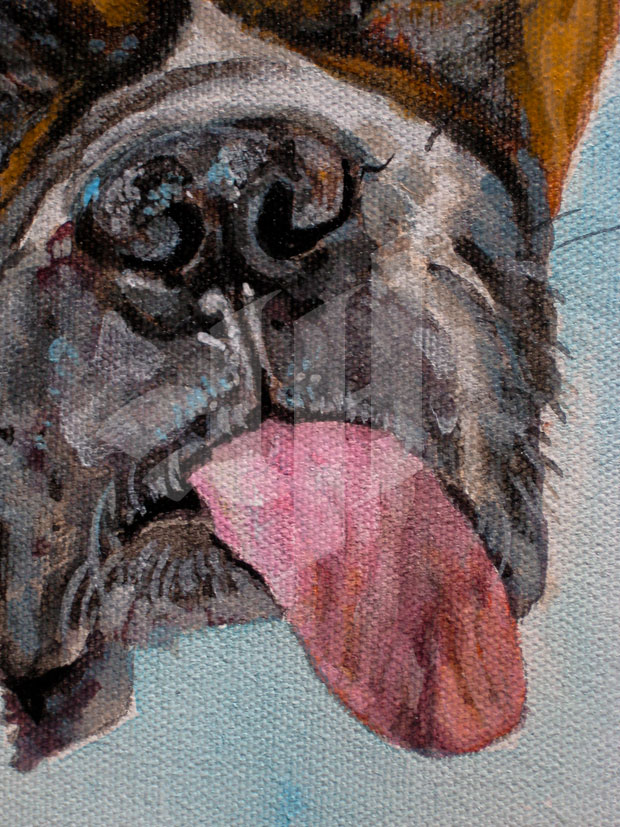 Elvis has an unnaturally long tongue that hangs out of his mouth at all times. Ajay loves it. So ofcourse Elvis had to be painted with his tongue all hanging out!!
Elvis is home now, happy as can be. I am told he loves his 4 km walk every morning. He steps off the pavement and relieves himself only in the gutter. He has been joined by his brother Oscar this week. Oscar is a two year old Beagle rescued from a drug testing facility in Bangalore. Last heard, they were romping around their new house enjoying the freedom and love that they both deserve.

Thank you Ajay. My best to ‘Elvis the pelvis’ and ‘Oscar’.

Please note– This portrait of Elvis is for sale. First right of refusal rests with his human dad. All proceeds barring one rupee go to the dogs as part of ‘The Poonchh Collection’.