Two young children is tiring, don’t let anyone tell you otherwise. All the love that you feel for them can’t take away the sheer exhaustion a new mother feels. Yes I was lonely and tired. I was also remembering all the letters that Supreet and I had exchanged over the years.

I digress again- Supreet and I have known each other since 1989. I was 14. He asked me to marry him the first day we met. We started formally dating in ’93 I think and got married in ’99. I traveled a lot with my father who kept getting transferred around the country. STD calls were expensive and mobiles phones few and far between. We did things the old fashioned way- snail mail.

Now my life in 2007 was busy and fast paced. There were emails and live Skype calls. There was Instant Messenger and Supreet was ‘seemingly’ not so far away.  Of course that was cold comfort when alone here. The post box was a reminder of the stark difference in where we had come from and where we were. So the box was painted with the two lovers faces again, complete with cheesy hearts and lotus. It got christened the ‘Prem Patr Dabba’ – the Love Letter Box. 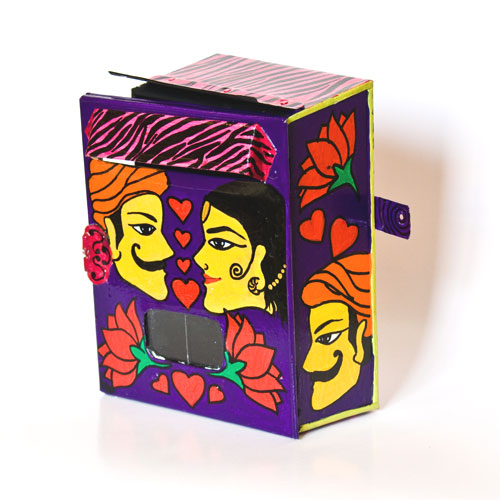