I asked my husband and kids – what do you think the dog is saying to Rakesh? And their answer was – ‘I looooove you‘. Though it was said with a scrunched up face and a gooey mushy voice. I think the little one is saying that too. But over and above the love I also see joy, devotion and expectation.

Do you see the love, the unquestioning and single minded focus? The expectation? It is like the doggie is saying – come lets play? Or maybe just spend some time with me? Can you imagine the stance of this doggie as he asks – ” Now papa, now. Can we play?”  And to me Rakesh in this portrait looks indulgent but in a kind of resigned way. ” I want to but abhi nahi….”

All of his doggies – his sons and daughters look at him like that. With eyes only for him. He calls himself their ‘papa‘. He is like any father, strict and disciplinary in parts and totally indulgent in others.

This painting is one more in a series of narrative portraiture that I have been working on the past few months. Story telling through pictures as it were. Rakesh Shukla  is the founder of The Voice of Stray Dogs (VoSD) and the inspiration behind The Poonchh Collection.

This is painted with Charcoal and Acrylics on canvas. It is approximately 20×20 inches. I used an older canvas that had a face from my sadhu/mask series. I did not like how that came out. The expression was all wrong. It showed the worst in a person. So I decided to turn it around and paint love on it. Wipe out the negative and bring in the positive 🙂 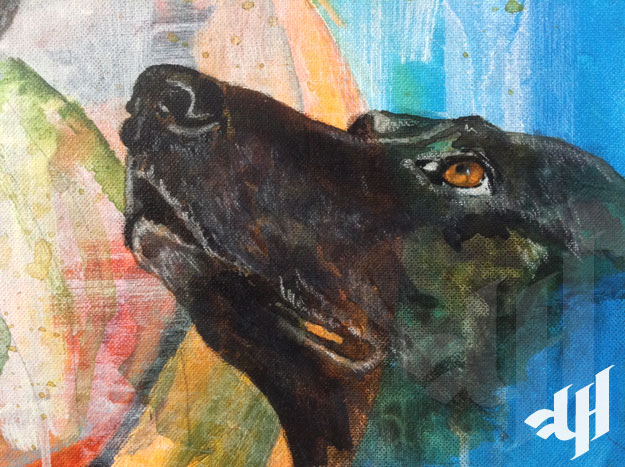