The next in the series of The Fusion Projects is with motorcycle company – Royal Enfield. Although the project came to me many months ago I started work on it only in August end. But as they say everything happens for a reason. By the time the tank was finished it was time for The Royal Enfield Rider Mania 2016 – an annual community driven event in Goa each November. And I had the joy of taking the tank to Goa. To see first hand reactions of bikers across India to my vision of a hand painted tank has been gratifying to say the least. I got to be a fly on the wall and just watch people react to the tank artwork.

The endeavour has been not just to paint a motorcycle tank but to view the entire exercise in a new way. The tank needed to look different from anything out there and still have my stamp on it. I was not looking to make just  decorative artwork that would sit in someone’s office or a showroom. I want to see how this painted tank fares on an actual motorcycle. How the paint will react to sun, moisture, dew. Will the paintwork stand up to general wear and tear and fuel spills. 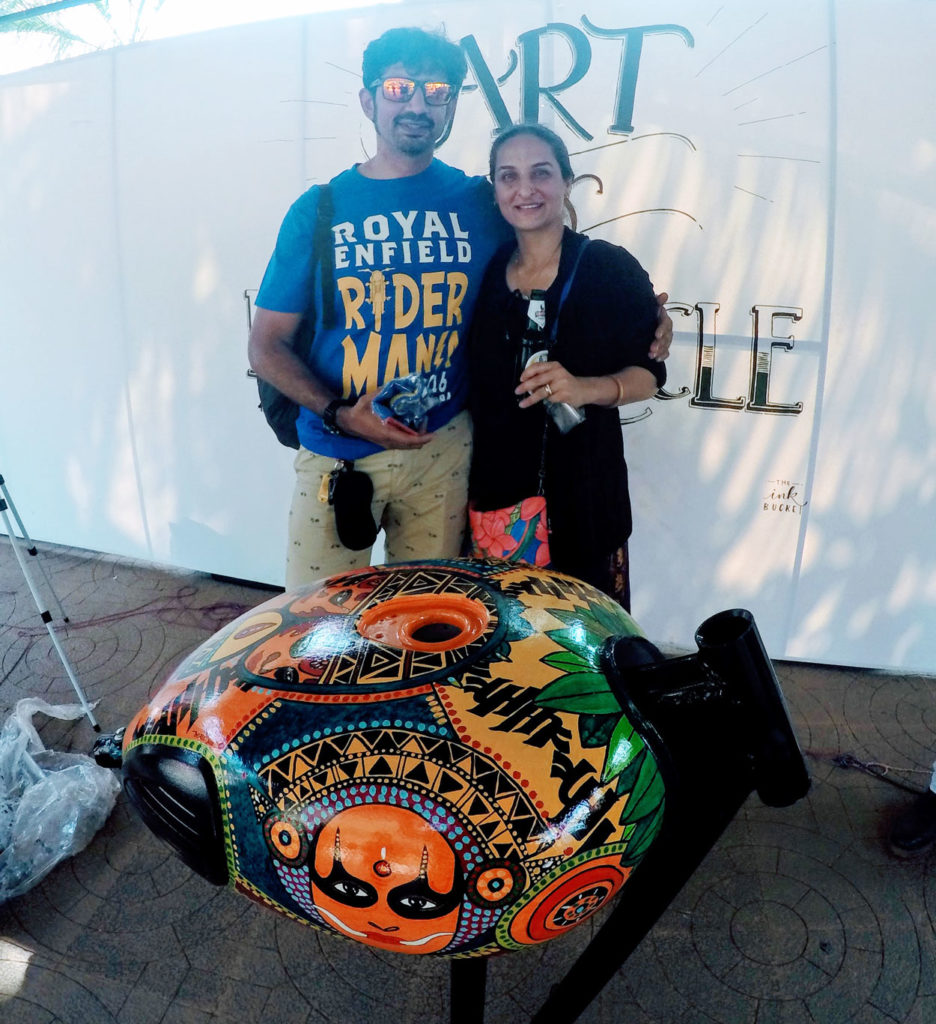 Therein lies the purpose of this joint exercise. I learn. Learn about material and it’s usage. I get to try and think out of the box from established norms of what constitutes successful artwork for bikes. The next step is to go to the Enfield factory and see how the paint is applied. To try an incorporate my artistic style while using industry standards. As a start I decided to paint with a brush and not an airbrush. Used Acrylics. And used a theme- Theyyam – which is not seen on bikes but has been central to my work for a few years now.

As a theme, Theyyam lends itself well to artistic interpretations. By it’s very nature, it brings forth goodwill to those in its presence and promises to ward off evil. What better way to kick start a new series. My friend Sachin Chavan – the Head, Rides and Communities, Royal Enfield – who was instrumental in getting me on board for this project has been a friend for almost 20 years. He rides (obviously!!) and my parting shot to him has always been to ‘Ride Safe‘. It has been similar to my father and brother who are both retired fighter pilots from the Indian Air Force. For them it was and is – ‘Fly safe, Blue skies and Happy Landings‘!

I hope the good will always carries through…

Theyyam is an artistic dance form where metaphysical thoughts and expressions of immortal souls are impersonated by a believer through a mortal body. Theyyam originated from “Kaliyattam” once practiced by the tribal community of north Kerala. Theyyam has grown to the present form through many transformations since it’s origin. Landlords and chieftains of those days are the main forces behind many of such transformations. The community and its body began to use this art to propagate the major theme of social enforcement. The artists are also encouraged by the authorities to introduce new themes into its traditional layers and classified different acts and expressions to match specific needs for their desire. The character representations were very broad. They range from mild to wild in representations.
Theyyam is a sect in which old heroes are sanctified and worshiped as the guardians of villages and homes. Yet, it includes a complex universe centered on the belief that a man can—after suitable mental, physical and spiritual preliminaries—don the costume of a particular deity and then become that deity. In this elevated state he assumes superhuman and divine powers—speaking, moving, blessing and even healing as a god or goddess. What is crucial is that the person is not possessed by the spirit of the deity. It’s important to understand that Theyyam has a larger purpose that goes beyond the territories of performance – to all those in attendance, it assures assistance and security during times of crisis, promising to resolve all their conflicts.

You can read about Theyyam here- http://theyyamat.blogspot.in/