I’ve been thinking long and hard about whether to post this or not.  In the end, I thought it better to speak up.
The client  Pallavi Srivastava ( @pallavvs on Instagram) commissioned a portrait of her late father and then never found time to see the final/finished piece and as a result, never paid for it. I sent her the painting anyway. It never sat right with me that this portrait of a father sat unclaimed in my studio.

The client asked me to paint her late father’s portrait and gave me only this one reference picture, to begin with. And this – “👍, hope my requirement is clear, no red jacket plZ, white kurta-pyjama plz”. I took the commission on the 25th of July, asked for a video call on the 7th of Aug with it almost complete.
Before then I had shared work in progress images on my Instagram stories and she liked them or then just did not comment. On specifically asking her this was her response – “It looks similar but frankly not how I remember him, the face isn’t so rounded and also the colour is too patchy and painted. Don’t know how to explain” 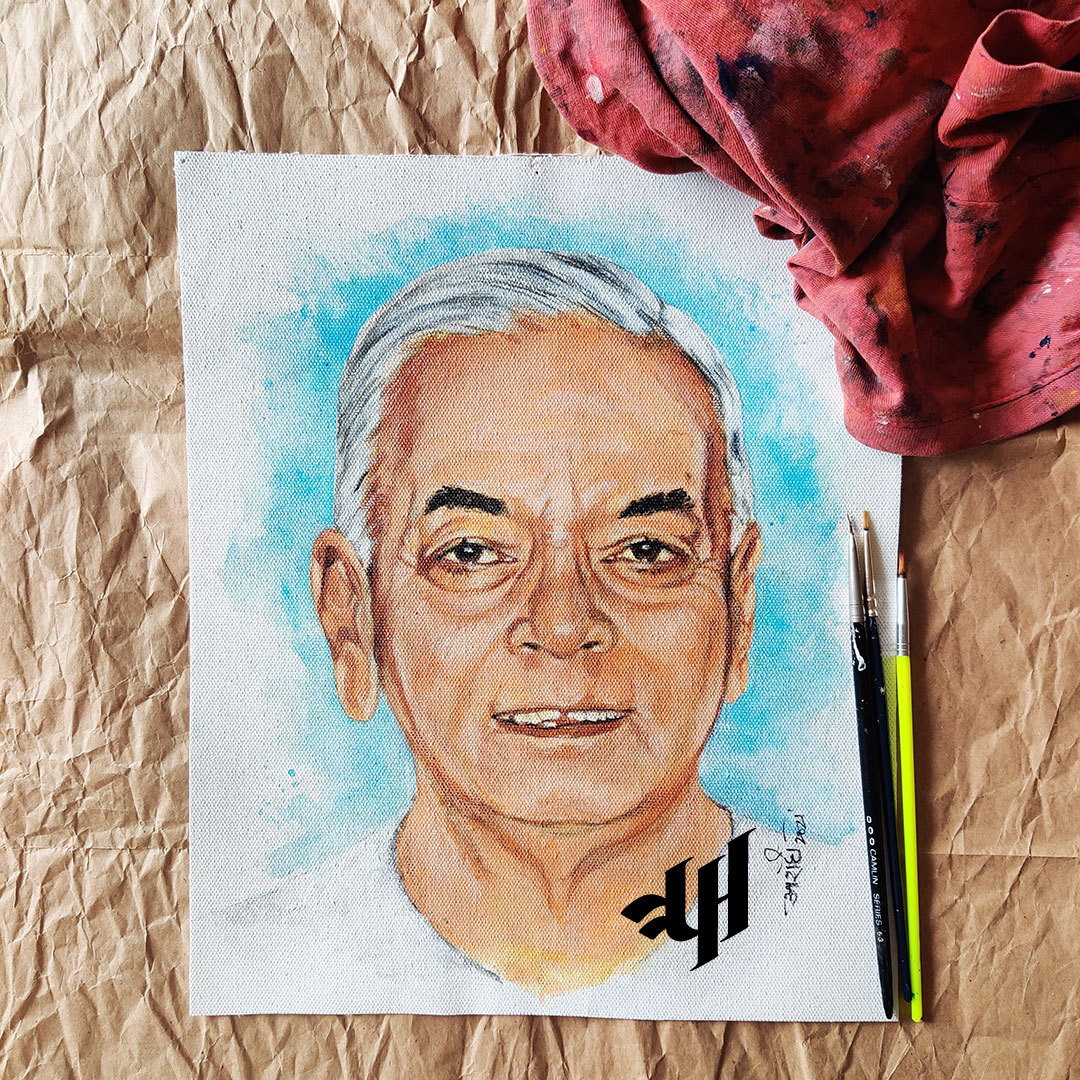 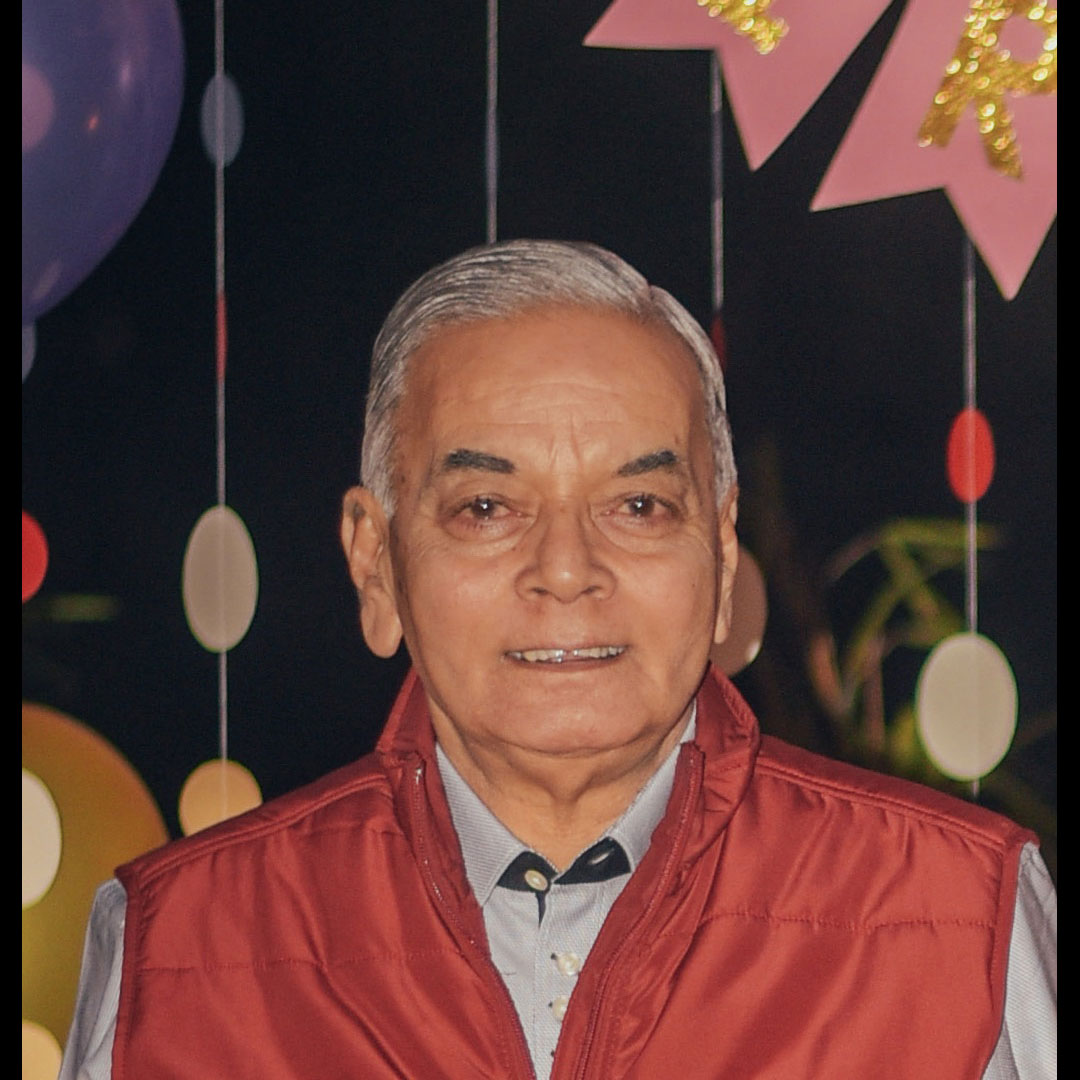 I immediately asked for a video call with her and showed her the painting side by side with the reference image on my computer screen. Told her the possibilities and also that given the reference image this was the best detail I was able to bring out.  Due to the nature of the photograph – the details were all flattened out by the harsh straightforward flash from the camera.  For me to do any kind of modelling of features would require me to add colour which would add to a painterly effect. After all, it is painted and not digitally created where one can use effects to completely give the end result a photographic feel.

She said she understood the problem I was facing. Asked me to do the best possible and also asked for minor changes around the chin which I was happy to incorporate. These changes were now incorporated keeping in mind what she remembered her father as not necessarily as you see in the reference picture. The colour value and contrasts were also toned down. She then sent me more images that showed clearly her ‘problem’ with the chin being too rounded.  Uncle’s 3/4th view, the side view is slightly different to the flat front on view image that she sent me as a base reference.

I asked her for a call on the 12th of Aug after incorporating the changes she asked for – she was busy. And has been ever since. She said she had just had a baby and I needed to understand. I do. Do note – I have two of my own so I completely understand the issue. I told her to take her time since I was going to be travelling and I would touch base at the beginning of Sep.

I called her again on the 1st of Sep asking for time. She was always busy. Then she tells me on the 5-6th of Sep that she started work one day after she came home from the hospital and works from home and is very busy. This was the point where I lost all patience and was frankly very angry at the sheer gall of this client. I asked her to please see the final painting and close this commission. She refused because she said she did not have time. I called her and messaged incessantly on the 8th and 9th of Sep. Requesting her to pick up the phone or message back and close this commission. She blocked me on WhatsApp. On the 21st of Sep, I messaged her publicly on her Facebook wall asking the same thing. She blocked me on FaceBook.

My lawyer called her and surprisingly she was rude and said ‘do your worst’. My lawyer sent her an email with options – options where she would never have to speak to or see me – she would interact directly with my lawyer and I would make any additional changes she wanted and make the final payment to the lawyer and take the portrait – she never responded. I now find she has done similar actions to at least two other people that I know of. By the way, the email was copied to her business id as well as an info* id of the business. There was no acknowledgement at all.

I have been advised by my lawyer to issue this statement in the public interest as it were.

She runs multiple other businesses, has partners and so on. These are the businesses listed on her Instagram profile “Pallavi Srivastava, Founder @ourbetterplanet21, Creative Director @sprinklesnstreamers, designer and founder @piecefme www.ourbetterplanet.com”

I would not want anyone else to be duped this way.  Given that she has blocked me and refuses to communicate at all. I am forced to put this out. I state here unequivocally – that I will be happy to apologize if I got this wrong. I had said then too that I would be happy to incorporate any changes she requires. But now since the portrait is already with her. That point is moot. She did not refuse to accept the package, did not return it, did not acknowledge it and on the contrary accepted the package. I have an acknowledgement of delivery from the courier company for the same.

I think she was unprofessional and rude. She chooses to ‘respect’ her work and time and not do the same for me. She realized that she made a mistake in the reference image she sent me and did not know how to backtrack. So she just ghosted me. If she was unhappy with the portrait she could have said so at any point instead of asking for changes and extending dates and time to talk and then not honouring those.

She did not pay me one naya paisa for this. The painting is with her with no acknowledgement of the same.

She does not have to pay me. I hope she finds it in her heart to donate the amount to any charity of her choosing. After all, it is a portrait of her late father and she has a now not so newborn in her house. Best to attract only good karma.
I have done enough work for ‘free’, given away more than I can write about, painted for charity on numerous occasions- so I am going to chalk this one up to experience.

Note-
If any of you are interested I am happy to share access to share details with all the pertinent chat and email transcripts. I have backups of all the said documents. This post and additional documents were prepared with the help of my lawyer.

Additionally, I say again if I got any of this wrong in any way- I am happy to apologize for the same. But her lack of acknowledgement on any level makes me believe otherwise. I sent her an email once the painting had been shipped to her and an acknowledgement was received from the courier company. I tagged her on stories on Instagram when I shared a post about this unfortunate incident without naming her on Instagram. No acknowledgement. So I can only assume that this is deliberate.

This conversation started on the 25th of July 2021 and she was asked for time on the 11th of Aug. Today is the 2nd of Feb 2022 – I think I have been more than patient and given her enough chances.

Do also read about Malini Agarwala of Malaga who copied my design without permission and used it on a bag which incidentally was showcased at the Lakme Fashion Week 2010.

This unethical behaviour is something that happens way too often and must be called out.
Do read –

My very own ‘Dior and People Tree’ moment(s)…

Live and learn (An unfair, unjust and not unadulterated world out there)