Durga: In all her glory!
In different avatars she is known by different names. Kali. Durga. Maa.

Choose your media/paper and your preferred print size below.

We offer acid-free archival grade giclee prints on both Epson Enhanced Matte Paper and Hahnemühle FineArt Media.
Epson Enhanced Matte media for images that are vivid, vibrant, accentuate the shadowy areas, and is a great choice for high quality fine art printing.
Hahnemühle FineArt media for images with incredible reproduction of colour, detail, contrasts and deep blacks on beautiful textured media with a high age resistance of over 50-60 years

Durga: In all her glory!
In different avatars, she is known by different names. Kali. Durga. Maa.

Durga’s earliest appearance is that of a destroyer of evil forces. she has been worshipped by devotional movements and tantric sects variously as the Divine Mother, Mother of the Universe, Adi Shakti, or Adi Parashakti. Shakta Hindu and Tantric sects additionally worship her as the ultimate reality or Brahman. She is also seen as the divine protector and the one who bestows moksha, or liberation. Durga is often portrayed as destroying an ‘asura’ while mounted on a lion. Durga is worshipped by Hindus throughout India especially in Kolkata and suburbs.

This is a digital reproduction of the original painting. The print is available in regular as well as premium quality, acid-free paper with archival inks.

There are no reviews yet.

Be the first to review “Durga 02 with border” Cancel reply 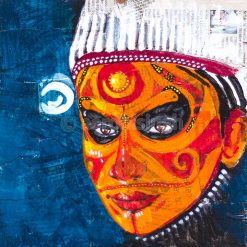 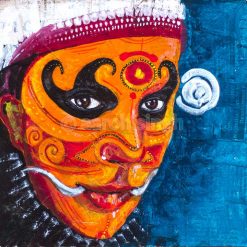